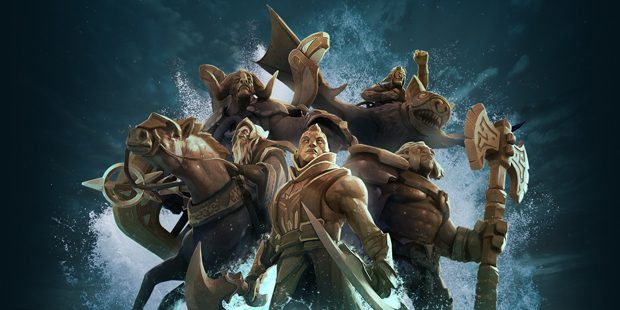 2. I forgot to tell you that before it got underway because I was having a capslock conversation with Alice about how DEREK ACORAH AND PAUL DANAN ARE IN THE CELEBRITY BIG BROTHER HOUSE TOGETHER RIGHT NOW.

3. There is a whole amazing guide to all the teams in the running for slices of that prize money pie by our James which will help fairweather fans get a handle on proceedings.

4. Paul Danan apparently created “panic in the House” when he mistook the fire alarm for the Diary Room door buzzer.

5. I have fond memories of playing Derek Acorah’s Spook Manor while on Skype with Alice. Derek Acorah is a psychic based in the UK who used to turn up a lot on the show, Most Haunted. Here’s a clip:

7. On a slightly sour note, one of the former winners of The International – Henrik “AdmiralBulldog” Ahnberg – was due to join the commenting/analysis/talent lineup at the event but was refused entry as he didn’t have the correct visa for the work he would be doing. Here’s his account of what happened.

The thing I find interesting is the impression there’s confusion over what visa the esports work might need. Obv, it’s also entirely possible that it’s just a case of Valve assuming PGL or Ahnberg had determined the correct visa and vice-versa, but I know that when I’ve previously travelled for esports coverage assignments there has been conflicting advice about what that work specifically constitutes and which visa or visa waiver it would therefore be covered by. Sometimes it’s an ESTA, sometimes it’s a journo visa, and that’s from official sources talking about the same assignment. Esports throws up a lot of weird stuff because it tends not to be straightforwardly covered by existing categories but wibbles about between things.

8. I hope Shaun Williamson does well in Celebrity Big Brother but ONLY if he comes back to doing Christmas pantos at my hometown and not cheating on us with East Grinstead or wherever.

Dota 2: Everything you need to know for The International 2017 main event!

The International 2017: Your guide to the biggest tournament in professional Dota 2!