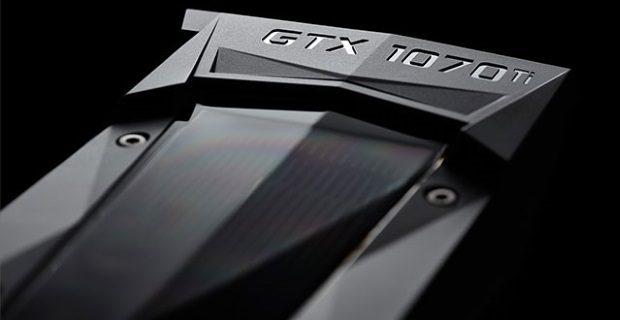 We all knew it was coming, but Nvidia have finally confirmed the GTX 1070Ti. Sitting roughly between the GTX 1070 and GTX 1080 in terms of specs and performance, the card will start shipping from November 2nd, with pre-orders open right now should you feel so inclined. It will set you back a fair chunk of change, costing upwards of £420 / $449 depending on which manufacturer design you go for, but with Nvidia’s next-gen Volta cards still seemingly a long way off and many regular GTX 1070 cards still priced in a similar kind of ball park, the GTX 1070Ti might be the card for you if you want something to rival AMD’s brand-new Vega cards.

Based on Nvidia’s current Pascal architecture, the GTX 1070Ti has considerably more cores than its non-Ti counterpart – 2432 of them, to be precise, compared to the GTX 1070’s 1920 cores – and a higher base clock speed of 1607Mhz. Its memory specs and boost clock speed of 1683Mhz are still the same as the regular version, but it should be a better performer and more proficient multi-tasker straight off the bat.

The GTX 1070Ti is a little more power hungry than the regular GTX 1070, drawing 180W rather than 150W, but judging by Nvidia’s testing comparisons on games like The Witcher 3 and Tomb Raider, it looks to be a worthwhile pay-off. We’re not talking huge boosts in performance over the GTX 1070, but those looking to upgrade from a GTX 970 should definitely keep an eye on it considering the current price of each card isn’t that far apart right now.

How the GTX 1070Ti compares to the GTX 1080, however, is still a bit of a mystery, as Nvidia neglected to provide any direct comparisons in its initial announcement materials, so we’ll have to wait until we get one in for testing to see how it fares in practice. Until then, though, watch this space.