What I learned playing Dota 2 with a professional player 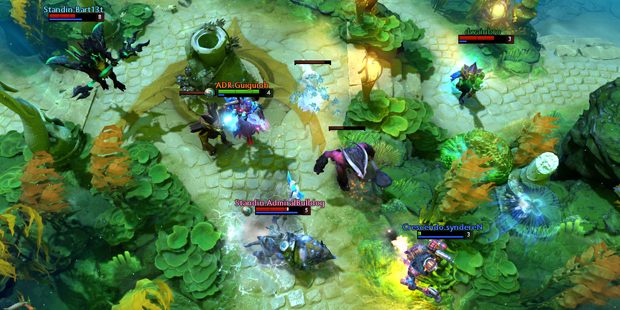 Our James ventured out of unranked solo queue and ended up on a Dota 2 [official site] team captained by a professional player and being streamed to thousands as some of the most famous casters in the scene commentated his efforts. No pressure, then! Here’s a little account of what happened and some advice for if you ever find yourself in this not-at-all-highly-specific situation…

Last Thursday, Dota 2 production studio and general community hub joinDOTA hosted Beat The Legends, a rather unusual showmatch: while both teams would be led by a bonafide professional player, the remaining eight positions would be filled by members of the Dota-playing public, or at least those who entered and won the random draw. The pros would be Crescendo captain and on-again, off-again analyst Troels “SyndereN” Nielsen, and Henrik “Admiral Bulldog” Ahnberg, champion of The International 2013, former Alliance offlaner and Europe’s most popular streamer.

One of the randomers would be, unfortunately for everyone else, me. 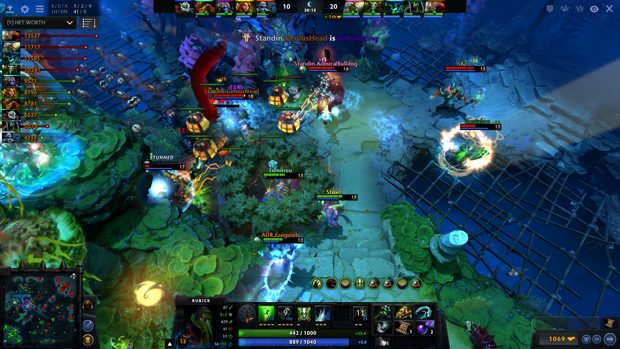 I didn’t have any particularly profound reasons for putting my name in the hat, beyond slight boredom with the chaos of unranked solo queue, but what initially sounded like a bit of a lark soon began to induce genuine nerves. For starters, I learned that it wouldn’t just be streamed on joinDOTA’s Twitch channel, but on Synderen’s and Bulldog’s as well, meaning tens of thousands of the most enthusiastic (to use the polite term) Dota fans would witness my mistakes and misplays. I’d also missed the fact that all three games would be casted by Tobiwan and Capitalist, two veteran broadcasters with no qualms about pointing out errors, usually in excitedly raised voices.

By the time everyone had assembled in Discord shortly before the starting horn, I was already alternating between baselessly ambitious trash-talk and self-deprecating comments about the UK Dota scene in blatant over-compensation for my fears of imminent public humiliation. Luckily, I had the rarest of MOBA teams – a friendly one.

Among this band of jovial strangers, none did more to get our heads in the game than our glorious leader, Synderen. Not only did he barely act creeped out at all when I recalled my anecdote of us meeting in the lift at ESL One Frankfurt, but he was surprisingly disinterested in the kind of laser-focused tryhardiness one might expect of a pro player, starting with encouragement to just pick our comfort heroes instead of theorycrafting the most statistically optimal lineup.

Here’s the full lifestream – warning for language and general meandering caster chat including but not limited to the characteristics of dragon genitalia:

This concession towards simply having fun was, I thought, a lovely gesture, which is why I felt a bit bad when I got obliterated in game 1. I’d ended up as the team’s offlaner, a role I can handle with reasonable success in uncoordinated pub games. When faced with a full five-stack being captained by a TI winner, however, my Sand King got shut down harder than sixteen different branches of Blockbuster.

The early lead my (mercifully forgiving) teammates had eked out was ultimately reversed by a potent Faceless Void/Invoker combo*, and the first game went to Team Bulldog. As did the second, where once again our pick-it-‘cos-it’s-fun composition had no answer for the saves and sustain of a Chen/Juggernaut/Outworld Devourer** team.

We’d lost the best-of-three, but still had the chance to claw back some pride in the third game, which switched from regular Captain’s Mode (the standard tournament format) to Reverse Captain’s Mode, an evil twist where each team picks their opponent’s heroes. 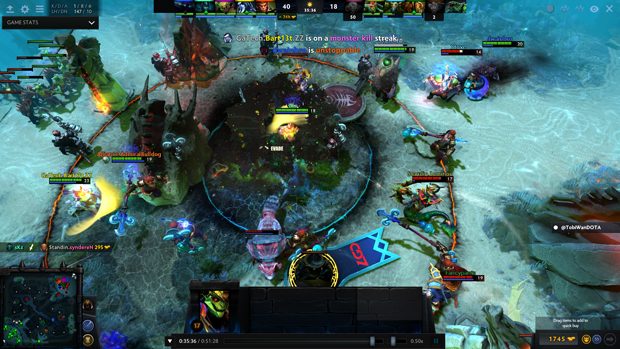 Synd suggested we give them heroes which synergise horribly, which meant Drow Ranger plus four melee carries. Team Bulldog responded with a different (some might say, more annoying) strategy of giving us heroes which are just nigh-impossible to play without hours of practice and significant micro-management skills. Thus, I had to play Bulldog’s own signature hero: Nature’s Prophet. I have about three games clocked with Nature’s Prophet, the most recent being some time in 2015.

I got mulched, obviously, ending the hilariously one-sided final game with 3 kills and 14 deaths. A brief moment of hope emerged four minutes in, when I inadvertently destroyed a tree Bulldog’s Monkey King was standing on, stunning him long enough for me to kill him with his own signature hero(watch from 2m24s for that):

And yet, he had the last laugh:

Despite three consecutive losses and about twenty consecutive deaths, I very much enjoyed my brief glimpse into the other side of spectated esports. As it turns out, the feeling of being watched hardly registers when you’re focusing on the dozens of things that need focusing on in a game like Dota. In fact, let’s use that note as a segue into a little list of things I learned from the experience:

The pressure of spectators can be tuned out; internal exasperation and tilting cannot

Obviously I’d never claim to have the slightest idea of what it’s like in a LAN environment, but online, it’s easy to act like the people watching on stream don’t exist because you’re never exposed to evidence that they do. A much bigger threat, in my case, was my own tendency to lose focus and motivation after a string of mishaps. Fortunately, the spectator factor actually helped here; I wasn’t going to let myself freak out in front of a five-figure crowd.

Having a good shotcaller is vital

Most players (especially those who solo queue) learn a version of Dota where teamplay occurs organically, which is to say, by accident. I’m not sure I can go back to this after being bossed around (constructively!) by someone who knows exactly what they’re doing – having a leader call out player movements and even when to use specific spells produces instant improvement in individual players’ capabilities. I definitely want to teach myself how to captain now, even if I’ll never reach the levels of sage-like game sense SyndereN exhibited with moves like this Roshan detection and followup Aegis snatch (that’s me going “Noooice”).

I’m still kicking myself for knowing the usernames of my foes a full day before the match, but not even bothering to look them up on Dotabuff. If I had, maybe we’d have known that they had a terrifyingly talented Invoker player, or that Bulldog rolls a mean Chen, and we wouldn’t have had our butts kicked quite so deeply. Also, speaking of usernames…

If you suck, don’t play on stream with your usual name and avatar

The following day, back in the realm of unranked All Pick, I foolishly entered a chat fight with a teammate over who was the blame for us throwing away a 20K gold advantage. Just as Bulldog had the last word over me, it turned out I’d given this gentleman some ammunition:

“this is why you lost with synderen”

Like I say, the match was great, but… damn it!

*Faceless Void is a jerk who can muck about with time and if he isn’t stopped he turns into a monstrous killing machine in the late game. Invoker is a jerk wizard who is played by show-offs who like wearing capes and casting TOO MANY SPELLS. – Pip

**Chen is a healing jerk who can create his own posse of jerks to make your life miserable. Juggernaut is a spinning jerk with a healing ward you can send to follow people round. The healing ward looks a bit like a floating toilet. Outworld Devourer is a favourite of Alice. OD can put you in space prison and then bop you hard on the head with magic. In case you are wonderering, yes. He is also a jerk. – Pip